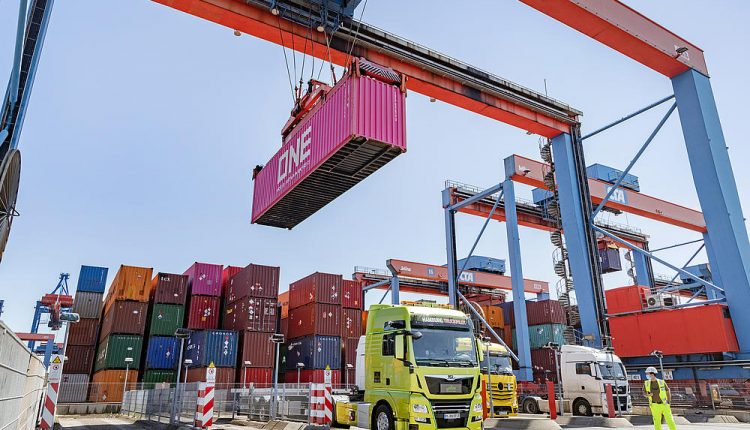 Successful test drives with automated trucks in the Port of Hamburg

Hamburger Hafen und Logistik AG (HHLA) and Munich-based truck manufacturer MAN Truck & Bus are developing and testing self-driving trucks for use in hub-to-hub container traffic as part of the “Hamburg TruckPilot” project. In late May, practice tests were successfully carried out for the first time with a self-driving truck in regular traffic at HHLA Container Terminal Altenwerder (CTA).

“This is how the future feels,” says Detlev Gosler, a driver with Emden-based freight forwarder Spedition Weets. He regularly drives his truck to HHLA Container Terminal Altenwerder in the Port of Hamburg and is very familiar with the procedures. But this time, everything was different: this time, he wasn’t driving the vehicle. The prototype of this self-driving truck steers itself across the terminal almost autonomously.

The goal of the Hamburg TruckPilot research project is to develop automation solutions for road transport. Specifically, it focuses on customer-specific deployment and the feasibility of integrating self-driving trucks in the container handling process at the CTA, which serves as a highly automated testing ground. Following preparatory and test phases, practical test drives took place at the end of May in which the prototype truck, equipped with electronic automation systems, drove in the course of regular logistical operations. The project participants summed it up as a success.

As part of the two-day practice tests, Spedition Weets brought 40-foot containers from Weets Logistic Center in Soltau to Hamburg on behalf of VW Group Logistics. A wide range of data for automated driving was already collected along the A7 motorway on the route to Hamburg. The Weets driver moved to the passenger seat at the check-in gate at the entrance to Terminal Altenwerder to make way for a trained MAN safety driver. He monitored the autonomous driving functions and would take over the wheel if needed. The prototype truck carefully accelerated on its own, approached the storage block at 25 km/h, and manoeuvred the container chassis backwards into the assigned lane. The automated return trip to the check gate took place following handling of the container. The safety driver did not need to intervene a single time. The decisive step in the Hamburg TruckPilot pilot project has been successful.

“We are delighted to be part of this innovative research project and to support the development of future automated solutions,” says Jakob Weets, Managing Director of Spedition Weets, with a view to the potential of automated driving functions to relieve the burden of truck drivers in the future.

Till Schlumberger, project manager at HHLA, is also delighted with the successful practice test: “Autonomous driving is coming. The law on autonomous driving that was recently passed confirms it. At HHLA, we want to – and must – prepare ourselves at an early stage for the prospect of autonomous trucks picking up or delivering containers at our terminals.”

Sebastian Völl, project manager for automated driving at MAN Truck & Bus, adds: “Hamburg TruckPilot is an important technological milestone on the road to hub-to-hub automation.” In connection with this, he also points to the law that was recently passed by the German parliament and the Federal Council which makes deployment of autonomous driving systems possible in principle in Germany when they take place in defined areas of operation such as on routes between logistics hubs, and when they are monitored by technical supervisors.”

In future, automated driving functionalities are expected to provide truck drivers with both support and relief. Further potential advantages are found in the increase in efficiency that results from anticipatory, automated driving. The concept significantly reduces fuel consumption and can positively influence the general flow of traffic. The project partners also promise higher overall safety.

The Hamburg TruckPilot project is part of the strategic mobility partnership between the Free and Hanseatic City of Hamburg and the Volkswagen Group. The project partners will present detailed results of the project at the ITS World Congress in Hamburg in October 2021.