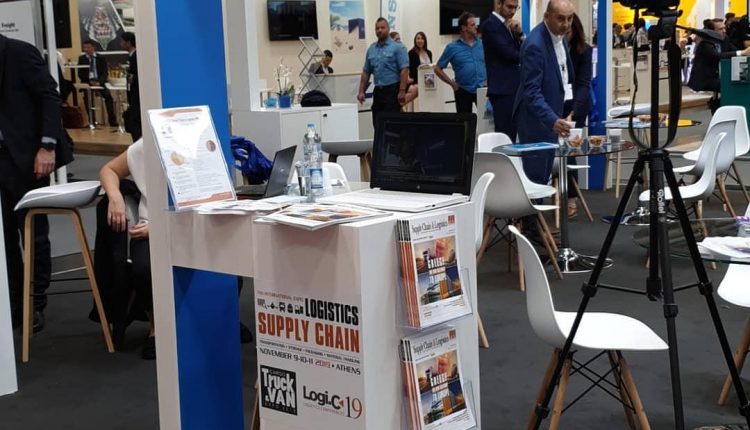 Greek Logistics in the National Greek Pavilion at “transport logistic” 2019

The 13 participants of the National Greek Pavilion at “transport-logistic” fair 2019 in Munich presented themselves and the perspective of the Greek logistics sector, during a press conference on Monday, June 4rth.

O.mind Creatives presented the special english edition of SC&L magazine, which is also a media partner of the fair, introducing all the information needed for the upcoming fair in Athens, 9-11 November 2019.

The representatives of the Greek Pavilion, mr Patsiavos from the German-Hellenic Chamber of Industry and Commerce, mr Papaharalambous from Elikon Transport & mr Psathas from Thriasion Logistics Center, talked to the journalists for the future of Greek Logistics:

“The geographical location of the country in the cross roads of 3 continents is of key importance for the promotion of international trade and for investments.

The development of infrastructures regarding harbours and airports as well as the gradual delivery of major road projects modes constitute a positive backround for business and creaties a new map for the years to come.

The proximity to the markets in Germany and in Central Europe has attracted german investments in the recent past and more are yet to come.

The world has to keep in mind that logistics is one of the most crucial sectors of the Greek economy for the development of industry and manufacturing. Along with the primary sector, new technologies, pharma industdry, tourismi and some others, logistics are expected to be the key drivers that will shape the new productive model of Greece.Being present in the biggest global meeting of the industry, Greek logistics aim to highlight the image of a dynamic industry that:

– renews its machinery and equipment

– seeks to broaden its horizons in the global markets

LISTEN HERE WHAT mr. Patsiavos, from the German-Hellenic Chamber of Industry and Commerce, said to SC&L magazine (video)