CTA recertified as the only climateneutral container terminal worldwide

HHLA Container Terminal Altenwerder has continued to significantly reduce its climate-damaging carbon emissions. TÜV Nord, which certified the climate neutrality of the state-of-the-art facility last year for the first time, has now reconfirmed its rating. The CTA therefore remains the only certified climate-neutral container terminal in the world. However, the development is by no means complete. Hamburger Hafen und Logistik AG (HHLA) intends to be climate-neutral by 2040. The CTA plays a key role in the attainment of this goal.

Angela Titzrath, Chairwoman of HHLA’s Executive Board: “Anyone familiar with HHLA knows that we do not simply rest on our laurels. Though climate and environmental protection have receded into the background due to the coronavirus pandemic, this does not mean the need to act has diminished. Regardless of the current challenges, HHLA remains firmly committed to its climate protection goals.” This means halving its absolute carbon emissions by 2030 compared with 2018 and achieving climate neutrality in the Group by 2040.

HHLA’s goals make it a pioneer in the Free and Hanseatic City of Hamburg. In the city’s new cross-party coalition agreement, the CTA is highlighted as a standard-bearer for the governing parties’ objective of making the Port of Hamburg climate neutral by 2040. 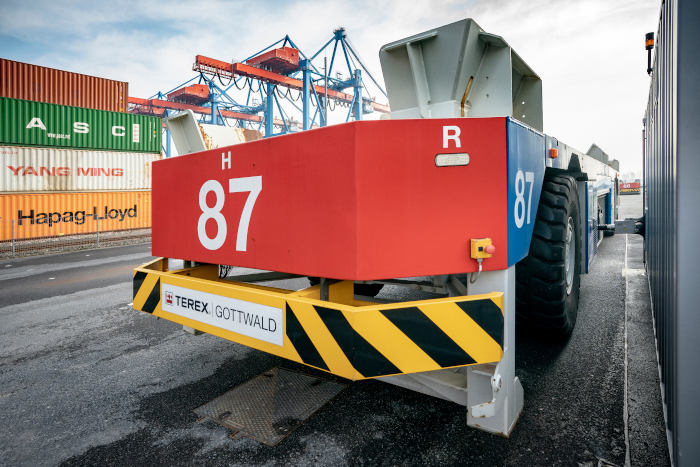 The 14 container gantry cranes for seaborne handling, the 52 completely electric gantry cranes in the container storage blocks and the four rail-mounted gantry cranes at the largest rail terminal in Europe are all powered by 100 percent green electricity. Half of the approximately 100 container transporters (Automated Guided Vehicles/AGVs) at CTA already run on lithium-ion batteries. Twothirds of the fleet will be replaced by the fast-charging battery technology by the end of this year and by 2022, all AGVs will have been switched.

The focus of technical enhancements is the avoidance or reduction of carbon emissions under economic conditions. HHLA offsets terminal processes for which this is not yet possible, due for instance to a lack of viable technical solutions, by means of emission reduction certificates. The goal is to consistently reduce the portion that is offset. Last year the carbon footprint at CTA was reduced by a further 6.4 percent which therefore did not require compensation. At the same time, HHLA is working with manufacturers on the development of new technological solutions. For example, prototype tests of battery-powered tractor units for use between block storage and the rail terminal are currently being carried out.

Titzrath: “Since its opening in 2002, the CTA has undergone continuous development. Today, it also serves HHLA as a research and testing laboratory for new, highly promising technologies. Solutions that have proven themselves here are frequently used later at terminal facilities around the world.”

Last year, under the guiding principle of “Balanced Logistics”, HHLA consolidated its sustainability strategy by defining measures and setting concrete guidelines and goals in nine areas of action. With the implementation of its “Balanced Logistics” strategy, HHLA is harmonising its environmental, social and economic responsibility. In its newly published Sustainability Report, HHLA demonstrates the ways in which it achieves its defined goals through solutions and projects.