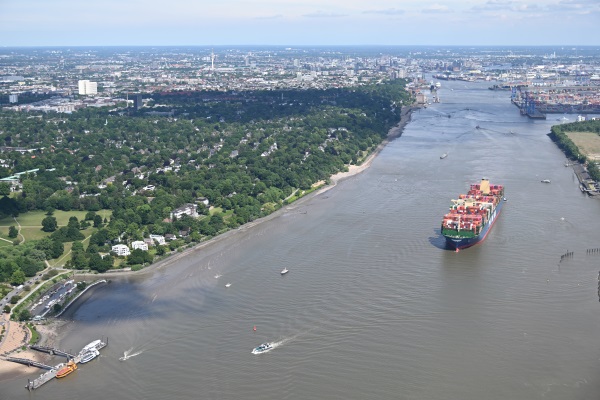 Only too evident worldwide, the negative repercussions of the Corona pandemic are also affecting the throughput trend in Germany’s largest universal port. In the first six months of the year, for instance, seaborne cargoes loaded/discharged at its terminals totalled just 61.2 million tons. That represents a twelve percent downturn. Both the main elements of throughput were hit, being well down on last year’s excellent figures. General cargo handling was 12.2 percent lower at 42.5 million tons, bulk cargo handling 11.7 percent down at 18.7 million tons. In the container handling segment, a total of 4.1 million TEU – 20-ft standard containers – were shifted across the quaywalls, a 12.4 percent fall on the previous year.

“We are naturally not pleased about this trend, but the drop in first-half throughput caused by the pandemic seriously affected all ports in Northern Europe. Owing to the weakness of the world economy and some withdrawals or considerable delays of global supply chains, as expected the effect turned out to be more severe in the second quarter than in the first three months,” said Axel Mattern, Joint CEO, Port of Hamburg Marketing.

Yet it is also important that even so, the port continues to provide cargo-handling and logistics services on a 24/7 basis. Despite difficult economic conditions, a dependable flow of products and raw materials for the population and trade/industry continues, stressed Mattern. “With its cargo-handling terminals, logistics and service providers, and its hinterland transport services, the port remains fully operational. That is truly appreciated by our customers and also gives our workers security,” said Mattern.

The largest volume fall on the previous year occurred on imports. These were 16.3 percent lower in the first six months at 33.7 million tons, being considerably weaker than exports totalling 27.5 million tons, the downturn here being limited to a single-figure 6.1 percent. On the import side, reduced steel production, in particular, led to lower throughput of ore and coal. Downturns of 24 and 10.5 percent were recorded for the part-segments grab and liquid cargoes. In the suction cargo segment, by contrast, first-half agribulk throughput soared by 30.8 percent to 4.1 million tons. Considerably higher grain and fertilizer exports were the main reason for the excellent first-half throughput trend.

On container handling as reflected in volumes with the Port of Hamburg’s top ten trading partners, the trend for the first six months varied a great deal. Except for Denmark, six countries here reported substantial double-digit downturns. The 16.4 percent collapse in seaborne container throughput with China, Hamburg’s top trading partner by a wide margin, proved impossible to offset through positive trends with other countries. Besides China, downturns in seaborne container throughput were also reported with Russia -14.9 percent, Sweden -13.3 percent, South Korea -14.4 percent, Denmark -2.7 percent, and Poland -10.5 percent. “The slowing down of the Chinese economy and the resultant cancellations of sailings on liner services – or ‘blank sailings’ in shipping parlance – led to lower throughput totals. With some delay, these repercussions were reflected in the first-half figures,” explained Mattern, who however has detected an initial recovery on both the import and export sides of the China trades.

Apart from USA – up 1.7 percent, other trading partners reporting growth were Singapore with 5.5 percent, the United Kingdom with 39 percent, and Malaysia with 1.7 percent. Among container partners, with a first-half 288,000 TEU the USA in second place enjoyed growth of 1.7 percent. “This strikingly good trend is attributable to the four Transatlantic services that started operating from Hamburg at the beginning of 2019. These have developed extremely well and ensured higher throughput volumes with the USA, especially on container services,” said Mattern. In third place with 212,000 TEU, Singapore achieved first-half growth of 5.5 percent. Mattern estimates that a significant part of this was produced by transhipment trades with other countries in the region routed via Singapore. From the United Kingdom, the main shipments consisted of empty containers for German industry.

For the next few months, Axel Mattern and Ingo Egloff, his fellow CEO, assume that initially the Port of Hamburg can adapt to a continuation of blank sailings and a slow recovery in total throughput. “In the past two months a stabilization of vessel sailings has been achieved. With the economy in China and Europe gradually picking up, I am confident that we have meanwhile reached the lowest point of the fall in seaborne cargo throughput caused by the pandemic, and will see a first noticeable recovery and improvement in the situation by the end of the year,” stated Ingo Egloff. While being almost 12 percent lower by comparison with last year, in June, for example, output in manufacturing industry was already 8.9 percent up on the previous month. That illustrates the dramatic aspect of economic development, feels Egloff. In the life of the Federal Republic, the collapse in economic output had been unprecedented. “Even if the export side is reporting some growth, it will be some time before we are again at pre-crisis level. And here we have entirely ignored trade wars, sanctions, and corona outbreaks in other parts of the world. On top of that comes German reluctance to consume, the impact being put at 130 billion euros. That naturally depresses imports of consumer goods such as textiles.” The Port of Hamburg’s marketing organization therefore assumes that a very fine throughput figure similar to last year’s can no longer be achieved this time.