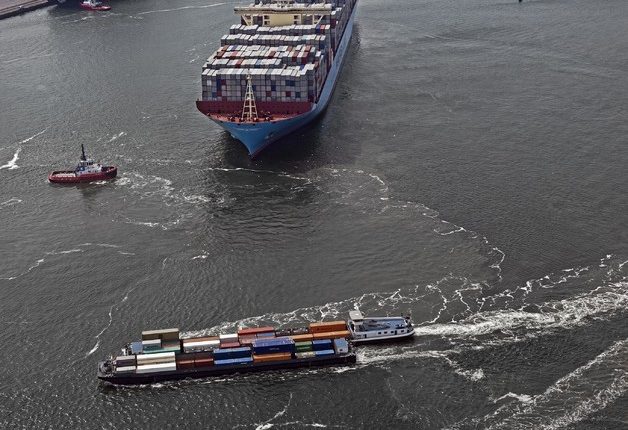 In the first half of 2018 the Port of Hamburg achieved total throughput of 66.5 million tons. That represented a moderate downturn of 4.9 percent, with the downward trend slowing in the second quarter. General cargo throughput at 45.5 million tons (down 2.2 percent) and bulk cargo throughput at 21.1 million tons (down 10.4 percent) contributed to the total in Hamburg. Bulk cargo represents one-third of the total. This segment caused 71 percent of the total downturn, with reductions in suction and liquid cargoes being market-driven. However, the 3.1 percent fall in handling of grab cargoes, the largest sub-segment, accounting for 55 percent – or 11.6 million tons – of the bulk cargo total, was within the range of normal fluctuations.

The trend in conventional general cargo handling once again proved very satisfactory. Up 777,000 tons or 8.0 percent, in the first half the upward trend first apparent in the fourth quarter of 2017 was maintained. In the first six months of 2018, imports of heavy freight rose by 62.5 percent to 160,000. Imports of metals and vehicles more than doubled: Those of metals rose by 121.7 percent to 79,000 tons and those of vehicles rose by 106.4 percent up to 25,000 tons.

In the first half of 2018 container throughput at 4.3 million TEU was slightly – 2.7 percent – lower than in the previous year. Handling of fewer empty boxes was the cause of 81 percent of the fall. In the first half a total of 525,000 empty containers (TEU) were handled, or 15.6 percent fewer. Handling of boxes stuffed with general cargo at 3.8 million TEU was almost stable, being 0.6 percent lower.

Railborne container transport achieved a distinct advance, with total handling 5.4 percent ahead at 1.2 million TEU. In the 2018 first half, the previous year figures were beaten, and even the 2016 record. Landside seaport-hinterland transport by rail therefore developed especially satisfactorily. This also prompted a 2.3 percentage-point rise in this most environment-friendly carrier’s share of the modal split to 45.1 percent. In the first six months, in handling for continental Europe 2.7 million TEU crossed the quays of the Port of Hamburg. The 1.6 percent drop here can be regarded as slight, around 83 percent of it being caused by a lower empty-box total. The Port of Hamburg’s share of containerized hinterland services rose in the first half by 0.7 percentage points to 62.1 percent of total throughput.

“A glance at the throughput trend for loaded and empty containers in the first six months shows that the Port of Hamburg handled less transhipment cargo and empty boxes. Its share of loaded containers remained stable in a tough competitive field, while Hamburg’s significance as Europe’s leading rail port was underlined by distinct growth in railborne container transport,” explained Axel Mattern, Joint CEO of Port of Hamburg Marketing. “Against the background of the still outstanding adjustment of the fairway on the Lower and Outer Elbe, it is understandable that shipping companies should utilize slot capacities on mega-containerships calling at Hamburg primarily for loaded boxes. Unlike cargo bound for the local region and loaded boxes, transhipment cargo and empty containers are less tied to specific ports. We therefore hope that planning permission will be granted before the end of the year, and the fairway adjustment finally implemented after a wait of 17 years.”

Almost 64 percent of the downturn in container throughput in the first half of 2018 is attributable to lower transhipment throughput, primarily on feeder services in the Baltic. Transhipment handling for the first six months totalled 1.6 million TEU, or 4.4 percent – or 76.000 TEU – less than in the previous year. “Transhipment performance, or its share of total container handling, may have dropped in the first half by comparison with the previous year by 0.7 percentage points to 37.9 percent. At the same time, however, the Port of Hamburg consolidated its position as the hub for freight bound for the Hamburg Metropolitan Region or originating there. Local cargo’s share continues to develop steadily,” commented Ingo Egloff, Joint CEO of Port of Hamburg Marketing.

Container volume on the principal sea trade route between Hamburg and East Asia rose by one percent to 1.6 million TEU in the first half of 2018. Among the sea trades where container services performed much better than in the same period of the previous year were also the East Coast of South America, the West Coast of North America, and North Africa. With steep growth of 37.6 percent to 127,000 TEU, Brazil moved up to fifth slot in Hamburg’s Top Ten tally of trading partners, having been fifteenth in 2017. Sweden came third – 2017: sixth – after China (including Hong Kong) and Singapore. For the first time since 2005, Taiwan appeared in this top group, taking tenth place. As in the previous year, in the 2018 first half the Top Ten accounted for 58 percent of total container handling.