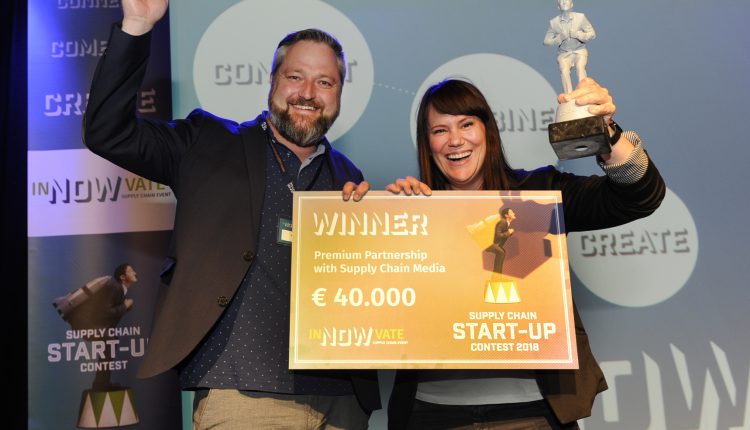 The Swiss start-up Luckabox was chosen as winner of the first-ever European Supply Chain Start-up Contest on 24 May 2018. The competition for European start-ups is organized by Supply Chain Media, publisher of the Dutch trade journal Supply Chain Magazine and the quarterly European magazine Supply Chain Movement. Luckabox impressed the jury and the delegates alike with its platform which enables retailers to arrange parcel deliveries to consumers quickly and conveniently.

In the first-ever European Supply Chain Start-up Contest, Luckabox was up against four other finalists: Cargoledger (NL), Cargonexx (D), Stockspots (NL) and Sustainabill (D). The Swiss company was voted the winner thanks to its smart use of existing couriers in order to make it very easy for city-based retailers to deliver online orders to consumers within two hours. “I’m extremely proud that we’ve won this prize,” commented Aike Festini, CEO and founder of Luckabox, enthusiastically. “This recognition will come in very useful to support our further European growth. We signed a contract to launch our services in Vienna just yesterday”. Besides a 3D-printed trophy, Luckabox won €40,000 worth of marketing exposure in Supply Chain Media’s various media channels.

The five finalists were allowed to pitch their entries during the inNOWvate Supply Chain Event at the De Rijtuigenloods venue in Amersfoort. Then, in a separate session, they were questioned individually by the jury, who evaluated the start-ups’ solutions based on four criteria: the commercial potential , the degree of innovation, the applicability in practice and the clarity of the message. The delegates’ votes were also taken into account in the jury’s final decision.

The start-up contest attracted 28 entries in total. Because many of those entries were actually from more mature companies, the decision was made to award a separate prize to the most promising scale-up. One of the key criteria in order to qualify as a scale-up was that the company must have secured more than €2 million in capital. The Belgian scale-up Pro Alliance received the most delegates’ votes and was named the winner, beating off competition from fellow finalists Fretlink (F), Seven Senders (D), Shippeo (F) and Urbantz (B). Between them, those five scale-ups have secured an impressive €35 million in capital over the past couple of years.